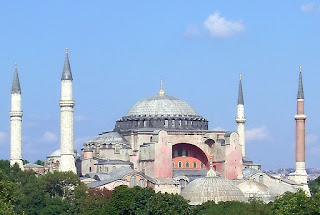 We have had examples of heresy at work attacking the root of the Faith, the Incarnation, and specializing upon that of which Arianism was the great example.


We have had the growth of the foreign body from within, the Albigenses, and all their Manichean kindred before and after them.

We have had the attack on the personality that is the unity, of the Church which is Protestantism.

The Protestant attack differed from the rest especially in this characteristic that its attack did not consist in the promulgation of a new doctrine or of a new authority,  that it made no concerted attempt at creating a counter-Church, but had for its principle the denial of unity.

And we now behold, even as Protestantism is dying, the rise and growth of yet another form of conflict the proposal to treat all transcendental affirmation as illusion.


We have had examples of heresy, working from without and forming a new world in that fashion, of which Islam is the great example.

The Mohammedan attack was of a different kind. It came geographically from just outside the area of Christendom; it appeared, almost from the outset, as a foreign enemy; yet it was not, strictly speaking, a new religion attacking the old, it was essentially a heresy; but from the circumstances of its birth it was a heresy alien rather than intimate.

It threatened to kill the Christian Church by invasion rather than to undermine it from within.