Stone Walls do not a Prison Make 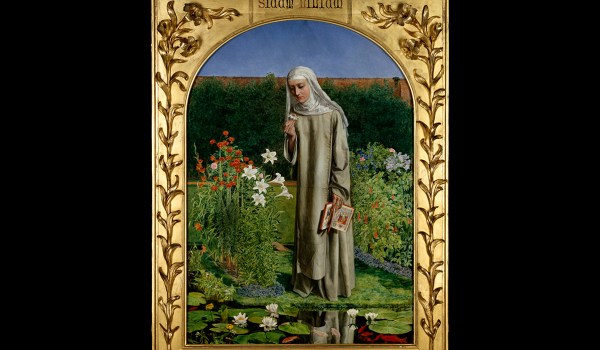 In nineteenth-century America, worlds collided when Catholic nuns moved into predominantly Protestant lands. These habit-clad, Latin-chanting women travelled across the Atlantic in order to build convents and live behind iron grates, entirely cut off from their new neighbors. The populace of the growing United States could not understand why anyone would go through the effort of immigrating just to stay behind closed doors.
Anti-Catholic sensationalism fueled suspicion of all things Catholic, and rumors abounded that nuns were prisoners of depraved clergy. From time to time, well-meaning individuals offered nuns freedom from captivity and were often surprised when they learned that nuns did not see themselves as damsels in distress; instead, they were quite happy to stay where they were.
We may forgive these would-be liberators for their misguided enthusiasm. After all, the prison and the monastery have a certain affinity. In each place, men and women live a regimented life, eat plain meals, and have limited contact with the rest of civilization. To many people living outside the cloister, the monastery is a prison, and why anyone would willingly subject themselves to such a life is beyond human wisdom. Yet the Gospel teaches us precisely that: to live beyond human wisdom.
The Gospel teaches us to live by divine wisdom, “you have heard that it was said, ‘you shall love your neighbor and hate your enemy.’ But I say to you, Love your enemies and pray for those who persecute you” (Mt 5:43-44). By God’s power, the meek inherit the earth, the Virgin bears a Son, and an instrument of death saves mankind. The same aspects of life in a cloistered monastery that seem restrictive are meant to free the nun from worldly cares and occupations to focus on the one thing necessary—God and his grace.
Grace in the soul is the ultimate measure of man. Nuns know this well. After death, natural things pass away, but the grace present in the soul remains. For this reason, Aquinas writes, “the good of grace in one is greater than the good of nature in the whole universe” (ST I-II q. 113, a. 9, ad. 2). A life spent seeking grace, then, is a life well-lived. Everyone should seek grace, but cloistered nuns are remarkable for their singular determination to win it for themselves and for others—for you and for me—by their prayers and penances.
Living apart from the rest of society gives nuns a certain distance from the ideologies and fashions of the day and the worries of day-to-day life. It better enables them to contemplate divine mysteries. The other sisters in the convent provide them with mutual support and worthy examples in the pursuit of holiness. Nuns live under the same roof as their eternal spouse, Jesus, and they visit him often. In him they find everything needed for their sanctification and happiness, so they need not go anywhere else.
Entering a cloistered monastery requires genuine sacrifice, but those whom God calls to live such a life receive a hundredfold (Mk 10:29-30). Perhaps they are the lungs of the body of Christ. They are hidden yet consistent, and their prayers give life to the rest of the body. The stone walls and iron bars of monasteries make fortresses rather than prisons, and in those fortresses the devil is defeated and souls are won for God.
The lives of nuns testify to the primacy of God’s power over human power. Through the prayers of these secluded women, he showers plentiful graces upon his children. We should be grateful for their vocations and entrust ourselves to their prayers.
✠